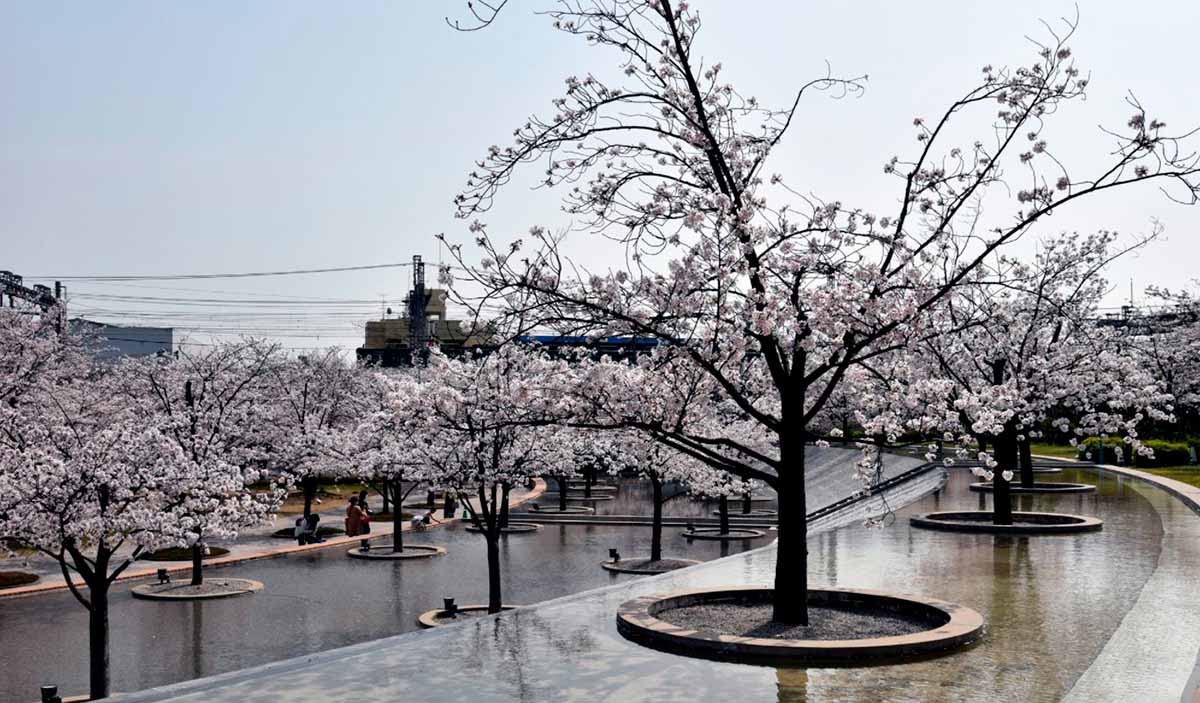 Silence, in music, is just as powerful as a played note, in sumi-e the empty space is just as evocative as a black ink brushstroke. Emptiness, in Japanese culture, is often a fundamental element thanks to Zen, and elements of this philosophy have also been mediated in the art of the sword, let’s just think about Takuan Soho’s words relating to the condition of mushin, the state of a person when his mind abandons all thoughts and judgments during combat, or in daily life, becoming free to act and react, without hesitation, towards an opponent. This emptiness is not the simple lack of something, but it is the result of training and discipline, it is the result of study and application. Like the one that characterizes the works of Ando Tadao, a contemporary Japanese architect with a global reputation.

Ando was born in Osaka, Japan, on September 13, 1941, and soon moved from his hometown to Kyoto and Nara, to study the great monuments of traditional Japanese architecture firsthand.

It is not easy to find information about his life: he lived the first years of his life with his maternal grandparents in the countryside, separated from his twin brother Takao Kitayama, who will become an appreciated developer in the sector of avant-garde shopping centers and who will often collaborate with Tadao, and far away from the Second World War bombings. After the conflict he moved with his family to the Asahi neighborhood, full of glass and carpentry shops. Here the young Tadao got to know many building materials and to directly see the carpenters in action. A small interest in the world of construction and architecture began to arise within him, and he was particularly struck by the hard commitment that these craftsmen applied to work. Most sources indicate a rather varied working past: at the age of seventeen he interrupted his studies and began a career as a professional boxer and later worked as a truck driver. However, all sources agree on his self-taught training, strongly influenced by traditional Japanese architecture, with a strong artisan matrix, from which comes an accurate direct knowledge of the characteristics of many building materials that derives from his frequentation, since his adolescence, of Asahi’s shops, where he grew up.

The first assignment came when he was only twenty, and for which he dedicated himself as a craftsman to the interior design for a night club. He later joined the Gutai Bijutsu Kyokai, the Gutai Artistic Association, thanks to which he developed an interest in experimental art instead of traditional painting.

Between 1960 and 1969 he undertook numerous training trips around Japan, on the trail of temples and tea houses, then leaving his country heading to Moscow, to the most important European capitals, to the United States and to Africa, to learn their architecture and history, as well as the various Western techniques.

Returning to his homeland, at the end of the 1960s, he finally founded his own studio in Osaka, the Tadao Ando Architect and Associates, at first transforming it into a meeting place for young architects and then, many years later, into a foundation for the promotion of abroad teaching experience.

The Seventies saw him engaged in the design of numerous single-family houses, including the Tomishima House in Osaka (1973), which later became the headquarters of his architecture studio, the Sumiyoshi House (1976), a small terraced house that expresses the Ando’s desire to reform society through architecture, matured on the basis of the hardships linked to the inadequacy of his childhood home, or the Azuma (1979) and Koshino (1980) Houses in Osaka. These all are experiences from which the common traits of Ando’s entire production began to emerge: the importance assigned to the wall, fully manifested in subsequent projects of a religious nature, and the crucial role of the sky.

In the following decade, the Japanese architect designed a series of complexes that brought him to the forefront of the international scene: after five years of work, in 1983 he completed the construction of the “Rokko I” residential settlement, perched on steep terrain along the side of the Mount Rokko from which one can enjoy the panorama of Osaka Bay, in the direction of Kobe. For the same place he will design, over the next thirty years, not only the extensions of the complex, which today almost entirely covers the side of the hill, but also, in 1986, the Chapel of the Winds, followed by the Chapel on the Water built in Hokkaido in 1988 and the Osaka Church of Light. The entire project of the complex developed precisely from Ando’s experiences acquired during his travels through Europe and based on housing units, which began to denote those typical characteristics of his art, made with simple elements, which interact with nature and with elements, often key to interpreting many of his projects, such as water for the “Time’s” shopping center built in Kyoto in 1984, anchored along the banks of the Takase river and shaped to recall the profile of a boat.

Ando’s fame grew when prestigious assignments began to arrive in the 1990s, such as the project for the Naoshima Museum of Contemporary Art (1988-1992), the Hompuku-ji Water Temple in Hyogo (1989-1991), the Japanese Pavilion at the Seville Expo (1989-1992), which reinterpreted traditional wooden architecture through contemporary technologies, the Pulitzer Foundation for Arts headquarters in Saint Louis, Missouri, USA (1991-2001), the Benetton Communication Research Center called “Fabrica” ​​(1992-2000), built in Treviso, Italy, around a 16th century Palladian villa which, restored and subjected to conservation interventions, became the fulcrum of the entire new settlement, buried uderground in order not to disturb the bucolic environment in which it is inserted, and the Modern Art Museum in Forth Worth, Texas, USA (1997-2002), which again proposed the theme of water thanks to an artificial lake on which large glass surfaces are reflected.

The 2000s, on the other hand, were almost a return to origins, during which the never abandoned theme of the Japanese single-family house returned, thanks to interventions such as the 4×4 House in Hyogo (2001-2003), consisting of a small reinforced concrete tower overlooking the Inland Sea and which addresses the issue of minimizing living spaces, a limitation actually imposed by the scarcity of available land.

His studies of traditional and modern Japanese architecture had a profound influence on his work and resulted in a unique blend of these rich traditions. His works have earned him the honorary positions of the Academies of Architecture of six countries, as well as having been Visiting Professor at the Universities of Yale, Columbia and Harvard, and finally receiving the appointment as Professor of Architecture at the University of Tokyo in 1997.

Ando created architectural works all over the world and receiving numerous awards including the Medal dedicated to Alvar Aalto which was awarded to him by the National Association of Finnish Architects in 1985, the prestigious Pritzker Architecture Prize in 1995, the Gold Medal of the American Institute of Architects in 2002, and the Kyoto Award for Lifetime Achievement in Arts and Philosophy, as well as international honours such as the Imperial Award for Architecture in Tokyo in 1996, and awarded Commander of the Orders of Arts and Letters and the Legion of Honor in France, and Grand Officer of the Order of the Star of Italy in 2013, Italian second civil honour of the State conferred on those who have acquired particular merits in the promotion of friendship and collaboration relations between Italy and other countries and in promoting ties with our country.

His architecture has always fascinated me, based on simple elements made with exposed concrete, an expression of that typical, but so striking, minimalism of the Japanese arts that has become characteristic of the great architect, strongly influenced by Le Corbusier’s modernism, also he self-taught and for which Ando had a real shock, but in harmony with the natural environment and with deep roots anchored in the spirituality of the spaces of Japanese architecture.

And certainly these peculiarities meant that his art soon became known and appreciated even outside the national territories, a condition that allowed Ando to continue to express his aesthetics even in more public spaces, as his reputation was spreading. Tireless designer, starting from the 1990s and 2000s, his works found a home all over the world, such as in Paris where he created the UNESCO Meditation Space and subsequently renewed the Bourse de Commerce building, in Milan with Giorgio Armani Theater, the renovation of Palazzo Grassi and Punta della Dogana in Venice, the School of Art, Design and Architecture at the University of Monterey in Mexico, the Poly Grand Theater in Shanghai and the He Art Museum in Shunde, also in China, as well as several other institutional offices in his home country.

But Ando’s simplicity and minimalism are not simple operations of canceling excesses, they instead reflect those characteristics that make the works of any art extremely enjoyable through sensations that do not directly express, through emotions aroused by silences, voids, never sterile but representation of those expressions that “convey a clear critical image of the proposal through simple forms, favored by the geometry of the spaces. (His work) always contains a bold proposal of life or an element of social criticism. […] But the Ando’s architecture is not minimalist: it is true that it is based on boxes without ornaments, but the bare walls increase the imagination and stimulate the observer’s empathy precisely because they are naked “(Masao Furuyama, author of the Ando retrospective dedicated to the architect).

I am very humbly reminded of all the teachings received on the subject of “cleaning”, once I have learned the substance of something, on the elimination of redundancies to maintain effective essentiality, a theme that returns every time I look at artworks as a complete neophyte, knowing nothing but they present to my mind this particular trait of emptiness, without which the substance could not be appreciated.

Ando’s studies relating to the Japanese tradition combined with his innovative boost led him to rethink classic techniques and solutions revisited according to his own aesthetics, which provides his works with an almost “artisanal” character in the definition of the details. An example is the use and shaping of materials: Ando almost exclusively uses exposed concrete, with formworks that are based on modules of the size of the Japanese tatami, 6×3 shaku (180×90 cm approximately), and often associates it with wood and stone. He is known for an exemplary style that evokes the materiality, connection and interpretation of spaces in a typically Japanese way, and his buildings are often characterized by stereometric volumes crossed by complex three-dimensional paths, which cross between internal and external spaces, with an element always present, the light, which helps to define the character of the spaces.

Simplicity, rigor, inner feeling, they all seem to be characteristics deriving from Zen philosophy, and show themselves as a distinctive sign in the works of Ando’s brilliant works, that always emphasize the association between nature and architecture, aiming to allow people to easily feel the experience of this union: he believes that the architecture is responsible for the execution of the site’s attitude thus making it visible. This not only represents his theory of the role of architecture in society, but also shows why he spends so much time studying architecture from the physical experience.