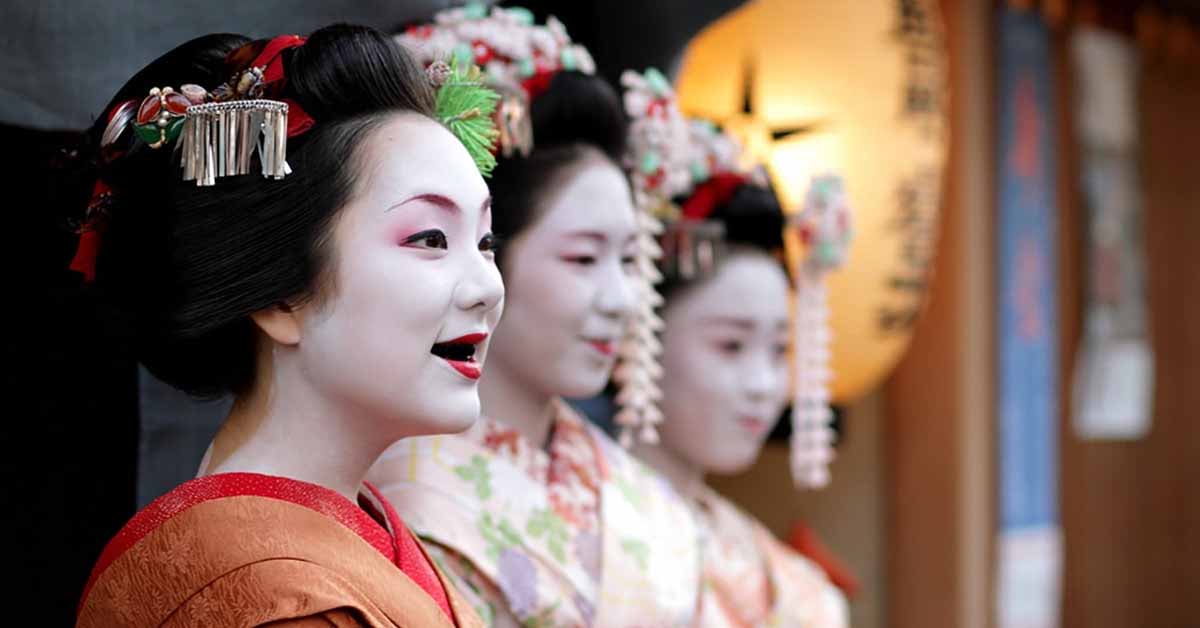 Teeth dyeing is, or rather has been, an ancient Asian tradition, although the origin is more typically Japanese, known by the term ohaguro, the meaning of which also indicates the specific color, as the blackening of the teeth. It may seem a strange fashion, but every culture, and in different eras, has had its own and let’s not forget that what we can now consider normal as people of different ages and on another side of the world it could appear on the opposite as an amazing curiosity: RDH, a dental hygiene magazine,  reports an anecdote told by an American hygienist of Japanese origins, whose old mother thought it rather strange that Western women used to put nail polish on their nails, with the same incredulous opposite reaction of Western patients who were told about the Japanese habit of teeth dyeing.

The fashion of ohaguro lasted almost a millennium, and it disappeared at the beginning of the last century only because it was prohibited by Japanese laws tending towards the modernization of the country starting from the Meiji era (1868-1912). The first evidence of this practice can be found already in the Kofun era (250-538), but it is in the Heian era (794-1185) that it finds its maximum splendor, and for various reasons.

The Japanese term kuro, hence the guro form contained in the name of this practice, is linked to the idea of ​​night and its contrast with the day, since the night is subject and inseparable from the day. Due to the inability to dye black with other colours, this colour was then associated with submission and loyalty, as well as strength and dignity due to its high visual intensity, which is why it was the predominant color among samurai and particularly popular within Buddhists. Ohaguro was a habit among women of wealthy families when they entered adulthood, at the time however extremely young, with a ceremony known as kanetsuke, deriving from kane, an alternative term to ohaguro typically used by aristocrats, with the literal meaning of ferrous drink due to the colouring preparation technique. Another typical ceremony of transition to adulthood involved men, and the ohaguro was then adopted for the ceremony of dressing the first hakama, called hakamaza. In both cases, for men and women, the colouring of the teeth was also accompanied by the eyebrows dyeing, a technique known by the term hikimayu.

The ohaguro black colouring was applied by means of a solution, often referred to as ink, called kanemizu, obtained by mixing ferric acetate and iron filings, mixed with vinegar or sake, black tea, spices or caramel for sweeten the terrible taste, a rice porridge containing tannins of vegetable origin, so that a bad smelling black pigment was created, which was also initially used to dye fabrics, and which was applied daily on the teeth.

However, there is an ongoing controversy related to the permanent result of this practice among the supporters of the daily application to guarantee a constant aesthetic result and the discovery of skeletons dating back to Edo-era dynasties whose teeth had been made black through ohaguro.

The more effective the colouring, the more the effect of this practice was considered beautiful and successful, also complemented by oshiroi, the use of white powder that helped to emphasize the contrast with the face and to mask emotions, giving a fixed and immutable expression so that it was not possible to see mood changes, which is also why even aristocrats and politicians made use of them. In fact, white faces were considered as another desirable female characteristics in those times, but unfortunately the white make-up, which was done with very fine rice powder, could cause a noticeable detachment between the artificial pallor of the face and the natural colour of teeth which at this point could appear more yellowish. It seems that Japanese women began to paint their teeth black to overcome such an aesthetic problem.

It was however a practice not particularly accessible to the rural people, therefore typical of the nobility to distinguish themselves, also used to differentiate the teeth of humans from those of common animals. It was also said that this practice helped to prevent cavities, a widespread problem at that time due to nutrition and lack of good oral hygiene.

Some Western scholars view the practice of dyeing teeth as a horrible habit to disfigure women, in a world purely led by men who thus encouraged female chastity by making women unattractive and thereby preventing extramarital affairs, but these theories do not find as much confirmation among Japanese sociologists, for whom ohaguro constituted instead a ritual through which society determined the female transition to mature age.

The social imposition of this practice on women was not so much determined by issues related to aesthetic fashion or because it was considered pleasant, but rather because of the desire to ensure that they did not arouse attention from others, since together with hikimayu and oshiroi, it was preventing the decoding of the emotions that might have been expressed. Since Japanese women did not like to have black teeth, they began to consciously cover their mouths while laughing or eating and it seems that it is for this reason that, even today after more than a century after the end of this practice, Japanese women still tend to cover their mouths while laughing or eating, even if subconsciously.

Although this practice had subsequently spread also among the rural population, limited to the occasion of particular recurrences, after the Edo period (1603-1868), teeth blackening remained the sole prerogative of the imperial family and the aristocrats, before being definitively banned by law on February 5, 1870, Meiji era, and practically disappearing at the beginning of the following era, Taisho, starting in 1912: it was the Empress of Japan herself who launched the new fashion in public, showing perfect and immaculate ivory teeth. From that moment on, the search for products that would help keep the colour of their teeth unchanged became unstoppable among the whole population and then ohaguro slowly lost its charm among the Japanese people, who immediately got used to the new trend in terms of beauty as having perfectly white teeth.

It is still possible to see ohaguro applied today but only in some places and for particular reasons, such as in the representation of dramas (ohaguro was originally strongly inspired by the masks as from Noh ad Kabuki drama), in the hanamachi or geisha neighborhoods, or in some matsuri, the popular Japanese celebrations.

The image of the ohaguro still resists, however, also thanks to one of the many Yokai that characterises Japanese folklore, called Ohaguro Bettari, a disturbing nocturnal feminine figure who appears dressed in splendid wedding dresses and who attracts young men who, not resisting her charm, end up getting too close and becoming victims. From behind, an Ohaguro Bettari looks like a beautiful woman wearing a kimono, or as already mentioned often appears as a bride in her typical dress, during the twilight hours and in places outside temples or inside a man’s house. At first, she hides her head or turns away from any viewer so that any man who approaches for a better look is surprised when she turns to reveal her face: an ugly, white, featureless dome smeared with thick makeup, containing nothing more than a huge, gaping mouth full of blackened teeth. This initial shock follows with a horrible chuckle, making the unfortunate young man run away and screaming in terror. Often accused of being shapeshifter pranksters such as kitsune, tanuki or mujina who try to laugh at the expense of unaware human beings, it has also been suggested that they could instead be the ghosts of not particularly attractive women who therefore could not get married, a more plausible folkloristic explanation than the vengeful ghost, as deaths and wounds are not typically attributed to Ohaguro Bettari, aside those scars of pride of those men on the run.

Almost as a characteristic of other Japanese arts where the absence of a trait actually conceals something more striking, even ohaguro seems to be meant to cancel some presence to enhance that of something else, in emptiness and fullness alternation typical of deeper and more spiritual culture compared to a simple, albeit long-lived, aesthetic fashion destined to change over time and perhaps to disappear completely. But who knows, as we are now normally used to changing  colour of hairs, eyes, lips, nails, etc, that we cannot take hold back a fashion as of different dental colors, compared to the search for the current candid white, absolutely unnatural due to the different natural shades and most importantly a  characteristic depending on belonging to different geographical areas. On the other hand, isn’t it also gold teeth a fashion, and haven’t we found dental decorations back from the times of the Etruscans and Egyptians? After all, we do not invent anything new, we only retrace cycles by exploiting new technologies and ensuring better health safety.