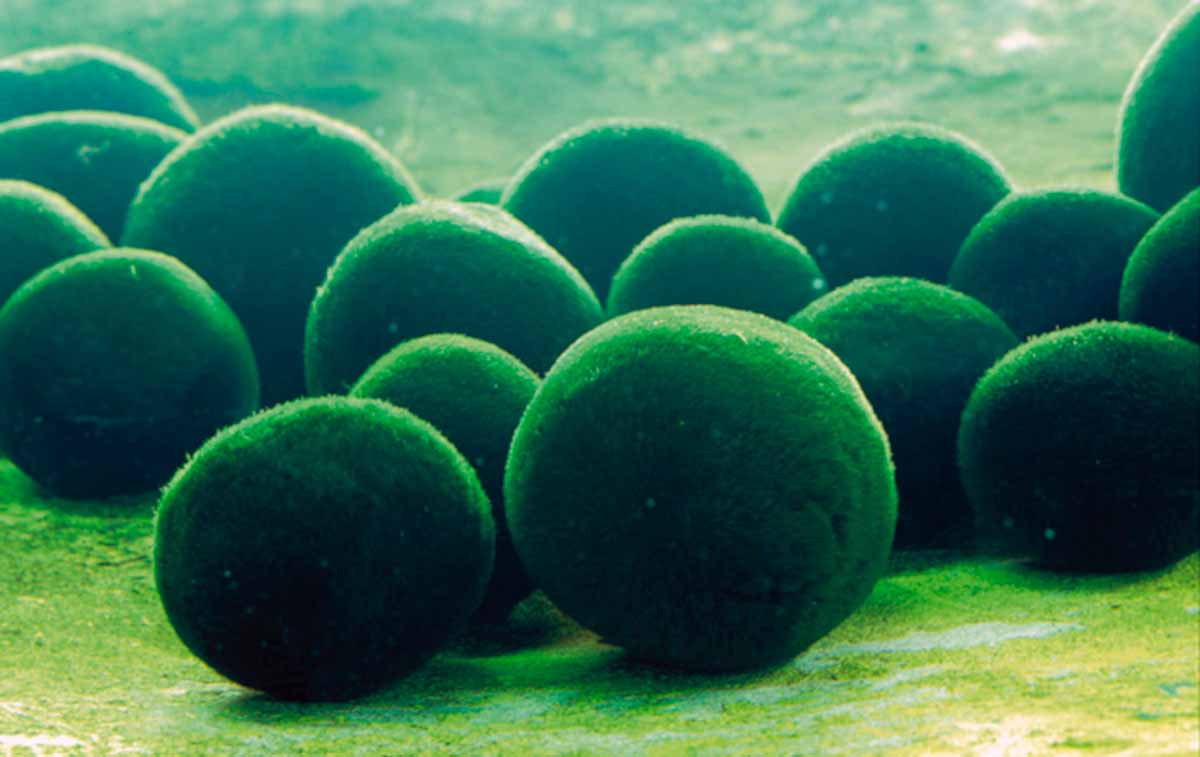 The scientific name is Aegagropila Linnaei, the family is the Cladophoracee, but it is more nicely known with the name of Marimo, a name composed of the Japanese terms Mari, ball, and Mo, generally indicating water plants.

It is an alga that develops as a soft bright green sphere with a velvety surface, known since the beginning of the 19th century, officially discovered in Europe, called Marimo by the Japanese botanist Tatsuiko Kawakami only at the end of the same century, and already known to the Japanese native Ainu population such as torasanpe, soul of the lake, or tokarippu, thing that rolls in the mud.

The Marimo in Japan are typical of Lake Akan, in Hokkaido, the more northern of the Japanese isles, and they are considered as a kind of special natural monument, as well as being named a Japanese National Treasure in 1921, and to which, among other things, a museum on the Churui island, one of the four of Lake Akan, where it is possible to observe these cute algae live in a giant aquarium created in the likeness of Lake Akan itself, as well as through underwater cameras that can return the idea of ​​their natural environment.

In fact, this alga can grow in three different forms

and in common, as can be guessed from the first type, they have the characteristic of not particularly loving light and of very slowly growth: in fact, the ball Marimo grows by about five millimiters per year, but they have an incredible longevity, and they are therefore considered as precious gifts to wish longevity, as well as having a cost proportional to their life and therefore dimension.

The spherical shape guarantees the chlorophyll function regardless of which “side” they are arranged, unlike the leaves, and curiously they are subject to a natural decline in terms of population due to the excess of nutrients deriving from agriculture and fish farming, which are often the cause of their disappearance from the lakes.

In fact, one of the peculiar aspects of the Marimo kept at home is that they require very little care: little exposure to light, and most importantly a never direct one, no food, not too frequent water changes, preferably dechlorinated, which make them “companions” suitable for all those who, like me, do not shine for passion and maintenance skills of aquariums and potted plants, while remaining a very pleasant presence on a working desk. In this regard, they are also used as tools for education towards the environment: these algae also defined as “pets”, in fact boast a respectable merchandising thanks to a doll called Marimokkori, a synthesis of Marimo and Makkori, a Japanese onomatopoeic term that indicates something that grows under one’s clothes, sometimes designed with vibration mechanism, made with an electromechanical system that makes it move, giving it a touch of vitality. In reality, the association of Marimo with environmental education is more linked to its function similar to a living Tamagotchi, while the doll, which is often referred to as disturbing due to its particular swelling and a smile that is not exactly good-natured, but which however arouses hilarity, has met alternate fortunes over time, coming to no longer wanted to be sold, although it is still a particular gadget appreciated by children and adults. Nowadays the Marimokkori shapes countless everyday objects, different types have been made, and the image has also been redesigned in manga style to market foods and snacks.

Although connected to Ainu culture, the connection of Marimo with the population and their tradition is controversial. In Hokkaido there are also festivals dedicated to the ball seaweed, and on one hand Ainu appreciate the fact that the area of ​​Lake Akan is invaded by tourists, while on the other they dispute that there are no historical data or legends that connect them to the Marimo, on the contrary, they were considered quite a nuisance as they continually got entangled in fishing nets. The only “legend” is that concerning the origin of the Marimo, which would derive from the tragic end of an Ainu girl, daughter of one of the tribal chiefs of the area who fell in love with a man of lower rank, a relationship naturally opposed by her family. During their love escape, they unfortunately fell into the waters of the lake, where they drowned together, remaining forever on the bottom: according to the legend, they were then transformed into Marimo, which is why this plant is now also known as a synonym for affection, eternal love and good luck as a couple, often gifted to the person with whom one would like to spend the rest of his/her life together.

A tragically romantic legend that seems to have more appeal attract tourists than with the tradition of the Ainu, whose appreciation for nature still remains a deep spiritual value. During the three days of the Marimo Festival held every year in October since 1950 you can appreciate the Ainu celebrations for this plant, which culminates on the third day when an elder of the community onboard a small wooden boat to kindly and respectfully bring back Marimo to the bottom of the lake.

One way or another, nowadays the Marimo market is growing, even if they are often not the natural original balls: their sale is in fact controlled by the Hokkaido Fisheries Commission, which offers Marimo made by artificially rolling up the filamentous variety in order to prevent the impoverishment of the ball-shaped ones.

For those who are however fascinated by these algae but do not want to engage in looking after them, it is possible to use the “Marimo” app (https://apps.apple.com/jp/app/marimo-shui-caode-xiaosana/id398361669) that allows you to grow the nice ball in a virtual aquarium: like a new Tamagotchi, the Marimo grows a little day by day, but if you don’t care enough for it the water will then take on a muddy appearance and lead to the tragic end of the poor ball.

A very particular characteristic of Marimo is floating: in nature, during the day the spheres often float up to the water surface due to  photosynthesis producing oxygen which push them towards the surface, while another great source of oxygen derives from the absorption of a large quantity of nitrites, nitrates and ammonium components from the water and the gas released is therefore observable in the form of visible bubbles on the surface on the stems.

Experiments of various kinds have been conducted on what has been called the Marimo dance, the characteristic daily movement from the bottom to the surface of the water that occurs exclusively during the day. Although the oxygen produced by photosynthesis and metabolism is the main culprit, it is believed that Marimo are equipped with a biological circadian clock, which leads them to reach the surface during the brightest hours to maximize photosynthesis, while it is thought that the night sinking is due to reasons of protection from excessive cold or ice that may form on the surface of the water.

Whether kept in an aquarium or in a vase, Marimo will produce themselves in this nice dance (https://www.youtube.com/watch?v=zTuvdcytq_g) which contributes to consider them as nice table mates. However, do not expect wild dances, they generally move slowly vertically, but by virtue of relative motions between different Marimo also present in a vase they can also move in other directions, really giving the idea of cute little animals playing together.

By virtue of the minimal care they require they can also be taken on vacation, and I like to think that they particularly appreciate the air change and the mountain view, as I see them more likely to let loose in their happy dances. Obviously, then, pay attention to the cat, because thos are irresistible balls that are so beautiful to sneak out of the pot.