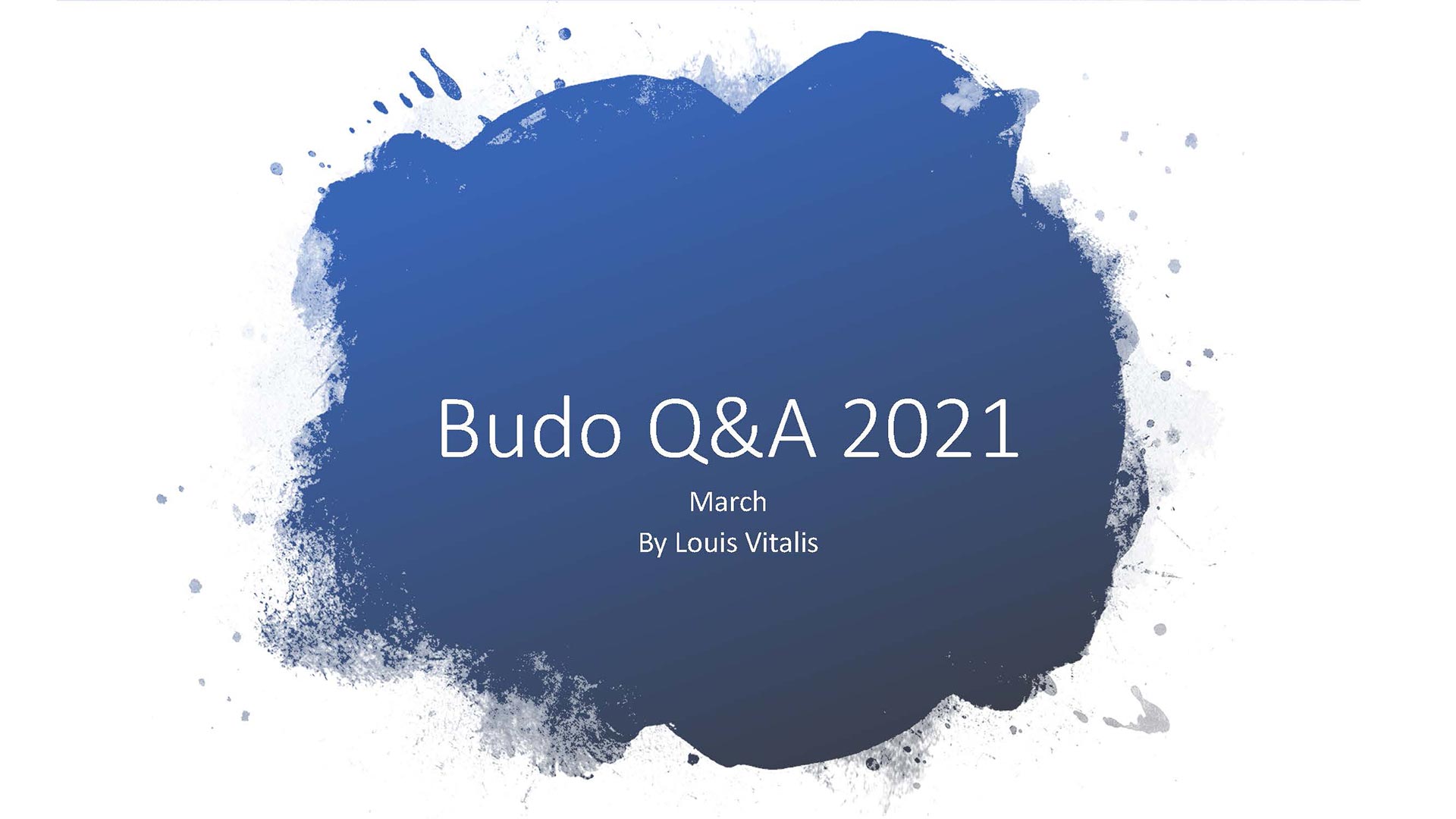 On Friday 12 March I had the pleasure of attending Louis Vitalis Sensei’s (first) webinar: Budo Q&A 2021.

Unfortunately, only the first 100 people were able to connect, so we decided to report some of the concepts covered during the meeting in this post. The organizers (Yushinkan dojo from Amsterdam, Elaine sensei & David sensei) from next time, will eliminate the max limit of 100 people.

The goal is therefore to answer some questions about budo, not on specific techniques or bits of kata, but theoretical question about budo history, culture, etiquette or terminology.

These are the topics covered during the webinar:

The first time Vitalis Sensei went to Japan was in 1977 when he was 17.

His first Kendo teacher was Edo Kokichi Sensei and, the first teaching he received – during his second visit to Japan in 1979 – was not a technique explanation but a concept that was the basis for taking the “way” seriously. Edo Sensei defined this concept as Katei Enman.

This is not a budo term and you will not find it in any budo book.

IF YOU WANT TO TAKE THE BUDO WAY SERIOUSLY, YOU NEED TO HAVE A PEACEFUL RELATIONSHIP WITH YOUR FAMILY.

Vitalis Sensei was lucky because Jolanda, wife and lifelong partner, was also a fabulous Kendoka, so he never had any issue for all the commitments, including weekends, in the dojo, teaching or refereeing. However, he have met many fine Budoka who did not have enough understanding in the family, which made them either quit completely, or drastically scale down their ambitions in Budo.

It is not a question of becoming a Budo professional, we are all amateurs, but if our ambition is to participate at any European championship or becoming 6°, 7° or 8° dan, to name just two examples, then it is essential to constantly pay attention to Budo without being distracted.

If your situation at home is not stable and peaceful you will go to the dojo with all kinds of thoughts in your mind that will disturb your practice and this is of course are going to delay the progress that you could make.

Louis Vitalis Sensei had already introduced this concept during one of his last Jodo seminars in Bari (Italy), also giving us a print with the reproduction of the frame containing the Gei Ni Asobu calligraphy, still present today at the Kodokan, in the town of Mito, prefecture of Ibaraki.

The Kodokan was a famous Samurai School, where Samurai were taught all the Arts and Sciences which were deemed good education in the later Edo period. Besides the Martial Arts, it also included Classical Texts, Calligraphy etc.

Gei: Art (as in Martial Art).
Ni Asobu: to enjoy, to live by

So the meaning of Gei ni Asobu could be:

In order to continue study of Budo for a long time, you must keep enjoying it

The study of this art is no longer aimed at fighting (and killing) but has the purpose of enriching mental and physical health, for this reason you will stop training Budo if you lose the enjoyment of training.

Already at the end of the Edo period (1603-1868), the Samurai of Mito discovered this fundamental principle, and this wonderful concept has become, for several years, the motto of Vitalis Sensei.

The translation of Seito is student; Deshi means disciple (not in religious form but more in the traditional art form).

It is important to understand this difference because for budo it has a special meaning and special annotation.

Seito indicates the students who follow a Sensei continuously and that there is at least a relationship of knowledge between the student and the Sensei. If you practice for a certain period of time in Japan, in a dojo, you do not necessarily become a “student” of the sensei.

Deshi identifies a relation between Sensei and Deshi much more close and intimate. Basically it’s relation based on trust. Only the Sensei can declare his student as Deshi. For example, Ishido Sensei has only 6 Deshi in Europe.

One of the founders of Kendo, Takano (Sasaburo) Sensei, wrote a Kendo book in ancient Japanese language, a language difficult to translate even for the Japanese themselves today. Only in 1972, one of his students, Mistuhashi Sensei (who was teacher of the aforementioned Edo Sensei), wrote a new version of that book, giving a kind of scientific approach that was completely new to Budo.

Since then, Kendo has spread a lot and there are many kinds of scientific approaches to Kendo, including:

Social background of Budo population in Japan vs Overseas

It is the turn of Jock Hopson Sensei who asks for an opinion on the different social / financial / educational / political trends among Budo practitioners in Japan and the relative comparison with European practitioners.

Martial arts such as Kendo, Judo and Karate have a common denominator: in these there is a “real” fight as a form of competition. Conversely, Iaido, Jodo, Kyudo have competitions, but you don’t fight each other.

Kendo, Judo and Karate are also practiced by many people, much more than Iaido, Jodo and Kyudo.

This means that among the practitioners of Kendo, Judo and Karate it is possible to find rich and poor people. The social contexts will be the most varied.

A Kendo dojo can be found everywhere, but Iaido and Jodo dojos are much less numerous. Jodo is even non-existent in some Japanese prefectures.

In Japan there are many different groups that practice Budo and in many different social contexts. The Budo population outside of Japan is usually made up of people curious to investigate other cultures.

How to Stand or Sit during a Seminar

Another question asked to Louis Vitalis Sensei about how one should be (standing / sitting) in a Iaido seminar during the explanation by a Japanese Sensei.

The advice is simply to avoid drawing attention to yourself. Is it possible to stay in seiza or standing. If you remain in seiza (pay attention to long explanations), absolutely avoid that your feet stick out, with your hands on the floor!

While standing, avoid crossing your arms and do not lean over the weapon.

Yes, Reiho has certainly influenced the fundamental techniques of Budo.

In modern iaido there are many kata in Seiza but in the ancient fighting schools (Iaijutsu) there were no kneeling kata. This is because it would have been an unsuitable location for battlefields.

So there is no doubt that the Seiza position is a kind of artificial way of sitting, which leads to sword drawing techniques which are unique to this position.

The correct position of the “modern” Hasso no Kamae was defined by the Zen Nippon Kendo Renmei, but in the past each school had its own Hasso no Kamae.

It’s likely that the current Kamae resulting from Moku no Kamae of the Itto Ryu and the Hasso no Kamae from the Shinkage Ryu .

In the modern Hasso no Kamae the arms are in a “comfortable” position that does not tire them as for example happens with Jodan or Chudan.

According to Takano Sensei, Hasso no Kamae is not an attacking position, but a position from where you can observe your opponent, and quickly change to an attack if needed.

Many thanks to Louis Vitalis Sensei for this very interesting webinar.

I personally learned a lot from this webinar. I have always been convinced that to progress in a martial art the “physical” practice alone was insufficient. Having the opportunity to deepen the theoretical and cultural part through question and answer sessions, conducted and managed by one of Ishido Sensei’s Deshi, is an opportunity not to be missed.

What is written on this page derives from my interpretations and reflections on what Vitalis Sensei expressed during the webinar. Therefore I apologize in advance for any inaccuracies due to comprehension problems.