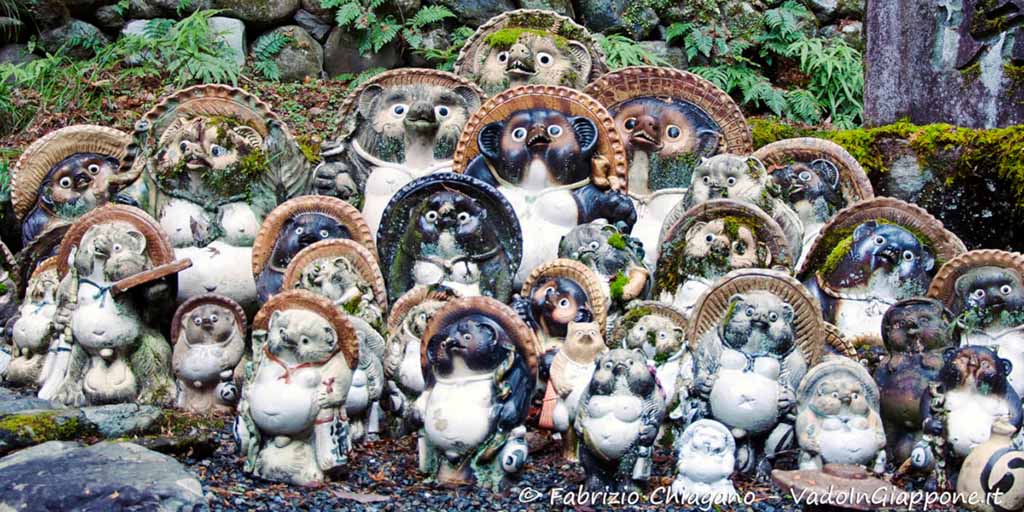 The autumn evening;
It has turned into a Buddha –
The tanuki
[Buson]

The Tanuki enjoys a privileged position among the mythical figures of the Japanese tradition, such as Kitsune, the fox, or Kappa, frogs or anthropomorphic turtles, all belonging to the Bakemono family (see Japanese Monsters, horror and fear with a pinch of education). Privileged because despite being counted among the monstrous beings who deceive humans to take their vital energy, the Tanuki has more the fame of the joker than that of the monster, and it is associated with good charm. Like every Bakemono, or in its most respectful form, Obake, Tanuki is characterized by the ability to change its state or nature: among its most peculiar characteristics, in fact, there is that of being a henge, a shapeshifter, and obviously his related ability to create illusions, the purpose of which is to give him a few laughs at the expense of hunters or loggers he comes across [1].

In Japanese folklore, Tanuki is generally represented as a graceful plump animal, with black-rimmed eyes and walking upright on its hind legs. It is actually a raccoon dog (Nyctereutes procyonoides), the most atypical member of the canine family. Native to Japan, southern Siberia and Manchuria, it loves wooded areas, is omnivorous […] and is a predominantly nocturnal animal, not very aggressive, and in winter it hibernates [1]. It is a small animal, with a hair colour that can vary from brown to gray to red, some rarer species can also be white, but all of them have the distinctive dark fur mask framing its eyes.

The Japanese tradition has deeply changed people consideration for these animals, originally assimilating them to divinities. When Buddhism began to spread across the nation, they were finally considered messengers or protectors, while maintaining the ambivalence as benign and malignant beings: unedifying, when not gruesome, stories began to spread around 1200, as the one of a Tanuki who beated an old woman to death and then served her as a dinner to her husband as “old woman’s soup”. But much more frequently Tanuki are instead protagonists of transformations into human beings, often into bonzes as in many temples, or even into objects, as in the famous story of the teapot [2], Bunbuku Chagama, according to which a very poor man freed a Tanuki stuck in a trap and that same night the little animal went to the man’s house and to thank him for his goodness, turning into a teapot and proposing to be sold to earn some money. The man sold the teapot to a monk, but at the first use the Tanuki, unable to resist the heat, began to transform itself again into an animal, without succeeding completely, and transforming back only its legs, it escaped from the monk. Returning to the man who had saved him, he proposed to set up a circus instead, where people would have paid to see the “teapot with legs”. The idea was finally successful and both protagonists got something in return: the man began to earn money and the Tanuki was able to repay his saviour, also obtaining a new friend and a house. In Japan, a tradition also says that objects in general, older than one hundred years, are actually Tanuki.

More often, Tanuki’s stories tell about animals who deceive humans for their own amusement, assuming purely human forms and costumes. Their very modern representation suggests sympathy at first glance: it is common to see Tanuki statues of any sizes in an upright position, characterized by a large belly and with a straw hat, holding a flask of sake. It is the most widespread representation of this animal, also leveraged by Studio Ghibli (see Happy New Year and Happy Birthday Miyazaki san) in the animated movie Pom Poko by Takahata Isao, which tells about Tanuki fight to regain the Tama hill torn from them by humans to make it a residential neighborhood [3]. In Takahata’s narrative there is no lack of those notes characterizing these animals, such as transformism, a magical art lost in time then taught again to young Tanuki after the patriarchal council decided to study the human’s habits, or the organization of macabre jokes as a ghost parade to drive humans away from the city, as well as other interpretations of the most typical activities of Tanuki, such as deception to rob, to mix in disguise with humans or to become bonzes of a Buddhist cult, transformations and activities that explicitly recall the stories of Japanese folklore related to these cute little animals.

According to tradition, even the sound that often echoes in the woods is attributed to Tanuki: the animated film Pom Poko owes its title to the onomatopoeia associated with the characteristic sound pon poko pon poko pon, made by Tanuki beating their big belly or, according to a slightly different image, their large testicles often drawn as drums, a sound with which it is said that they created to frighten, and therefore to drive away wayfarers from their areas.

Tanuki are considered very powerful magical animals and the possession of human beings is called Tanuki Tsuki [4], through which possessed victims acquire new personality traits, among which gluttony stands out, as well as other symptoms such as illness, melancholy and talkativeness. Possessed humans often become so hungry that they eat large quantities of food and conspicuously gain weight especially on the hips while the nourishment ends up in the spirit of the Tanuki, even reaching lethal effects as the victim’s malnutrition: although the outcome may come to nefarious conclusions, the possession can be made by the Tanuki just simply as a joke, and being particularly powerful it requires the intervention of an equally powerful priest to be forcibly terminated. An alternative remedy is the divinization of the Tanuki: when it is raised to the level of Kami, Tanuki will no longer possess human beings, and it is for this reason that it is possible to see sanctuaries erected for the worship of particularly problematic specimens. A temple known for the veneration of the Tanuki, instead of the more common Inari, the fox, is Yanagimori Shrine, in Tokyo, built between the seventeenth and eighteenth centuries, but associated with the Tanuki only from the nineteenth century.

The fame of this animal, in Japan, has changed over time, taking on more positive connotations, and similarly to the Maneki Neko, the lucky cat (see Maneki Neko and the Japanese love for the cat), it has become a symbol of prosperity and luck, thanks to its special traits, also called the eight blessings:

The particularly exaggerated size of the Tanuki’s testicles, which is often depicted in artistic representations, also arises from historically technological reasons. The skin of the testicles of the Tanuki was in fact considered precious in the goldsmith metallurgical field as it is very thin and elastic, ideal for wrapping gold during the realization of the Japanese gold leaf, the Kinpaku, very thin gold sheets (up to 0,0001 millimeters!) Which are used for the decoration of tableware or other daily use objects, sacred objects and kimono [5].

From the scientific or artistic reality, it soon passed to tradition and legend, and in Japanese culture the belief that the Tanuki would have the ability to swell and enormously dilate the testicles took hold, which is referred to by the popular term Kintama, vulgarisation of the similar term Kin no tama translatable as “golden spheres”. According to an ancient saying (Tanuki no kintama hachijojiki) Tanuki would in fact be able to inflate them up to the size of eight jo, one jo being the surface occupied by a tatami, typically of the size of 182 x 91 cm. From this legend originated a series of joking illustrations called Tanuki-e, the so-called Tanuki paintings, with which many very famous artists distinguished themselves, such as Kuniyoshi who developed the theme with an inexhaustible imagination [6].

The union of popular beliefs with the spread of the Tanuki-e contributed enormously to the creation of the lucky charm powers of the Tanuki due to the sexual attributes of these animals, a reason why Tanuki statuettes are still found today outside the commercial establishments as a sign of good prosperity in business. For the most part, Tanuki statues are made with Shigaraki-yaki, a type of pottery produced in Koga City, Shiga Prefecture, and its surroundings. According to the Association of Local Pottery Makers, the now familiar design of the cheerful and slightly funny-looking Tanuki, which often carries a flask of sake, was developed by a potter, Tetsuzo Fujiwara, who moved to that area in 1936 and devoted the rest of his career to Tanuki statuary art. In 1951, because of an imperial visit, the city prepared a special row of statues of flag-waving Tanuki for the visit of Emperor Hirohito, who was so fascinated by this welcome that he wrote a poem: obviously the resulting advertising contributed significantly to the spread of the popularity of Tanuki statues [7].

Tanuki, although they are nice and harmless canids, are not however domesticated for the company of man, and in many countries their possession is forbidden. In fact, they remain wild animals which also  hibernate, with a mostly nocturnal life, and after being exported to Europe, starting from the 1920s, they have become an invasive species, in addition to body size increase by a factor of two compared to Japanese specimens.

But if you hear a noise coming from the house shutters and look out to find out the cause, it would be possible to find yourself in front of the gigantic face of the Ookamuro, a specter considered one of the innumerable forms Tanuki can transform into: do not be afraid, though, as in this case the joking and inoffensive spirit of Tanuki prevails, as he simply enjoys surprising or frightening people, but without causing any harm or damage, boasting impersonations that can be counted among the most original of the entire Japanese spirit panorama [8].